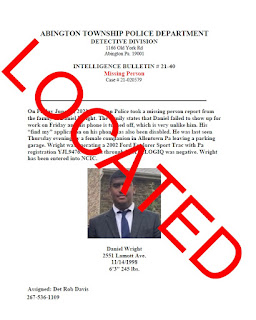 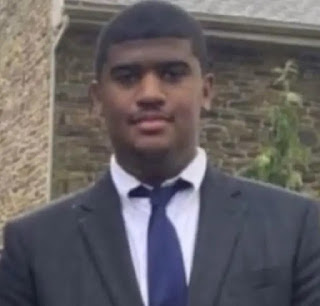 He is believed to be driving a 2002 blue Ford Explorer Sport Trac with PA registration YJL9476.

Anyone with information is urged to call the Abington Township Police Department at 267-620-1400.

Posted by Jill and Tara at 6:40 AM No comments: 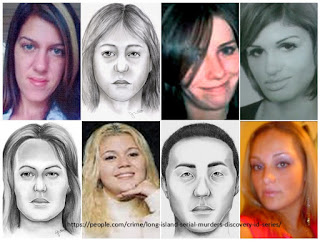 Ariel Zangla, 'She got what she deserved"- Sarra Gilbert defends stabbing her mother to death, Daily Freeman, April 2, 2017.

Aryelle Siclait, Who was Shannan Gilbert from Netflix's Lost Girls, and what happened to her? Women's Health.com, March 13, 2020.

Bernice A Pescosolido, Bianco Manago, and John Monahan, "Evolving Public View on the Likelihood of Violence From People with Mental Illness: Stigma and Its Consequences", Health Affairs, Oct 2019.

Gina Tron, Who were all the victims--and suspected victims- in the Gilgo Beach murders of "Lost Girls"?, www.Oxygen.com, March 12, 2020.

Jennifer Millman, Police Reveal Identity of Gilgo Victim Previously known only as Jane Does #6, NBC4.com, May 28, 2020.

Korrin Miller, What happened to Mari Gilbert's daughters, Sherre, Stevie and Sarra? --And where are they now? Women's Health.com, March 17, 2020.

Posted by Jill and Tara at 6:56 PM No comments:

Ingredients
1 Tsp garlic powder
1 Tbsp diced onion
1 tsp chopped parsley
Oregano to taste
1/2 cup Italian bread crumbs
2 Tbsp Olive oil
1 can (10 oz) minced clams (with liquid)
Salt to taste
1 Cup Parmesan cheese (6 Tbsp)
Paprika to taste
Directions
1. Preheat over to 375.
2. In a frying pan, heat oil. Add garlic, onion, parsley, oregano, and bread crumbs and sauté for about 2 minutes, until onion begins to brown slightly.
3. Add salt and clams. Mix.
4. Take clam shells and spoon mixture into each. Sprinkle lightly with cheese and crumbs.
5. Place on baking sheet and bake for 25-35 minutes, or until tops are crusty.
6. Sprinkle lightly with paprika and serve hot.
Serves 18
Get clam shells at: North Florida Shells or at any other baking suppliers online.
Enjoy Murder Bookies!  AND a big thank you to Facebook group Long Island Foodies and Birtle for the recipe!

Posted by Jill and Tara at 6:55 PM No comments:

Salt and pepper to taste

Thank you QueenReyney at AllRecipe.com for this delicious recipe we are sharing with our Murder Bookies! Incredible!

https://www.allrecipes.com/recipe/189930/southern-pimento-cheese/
Posted by Jill and Tara at 10:31 AM No comments: