The following sources provide a terrifying insight into the crimes of the Golden State killer and helped Tara and Jill immensely in preparing the I'll be Gone in the Dark episode. 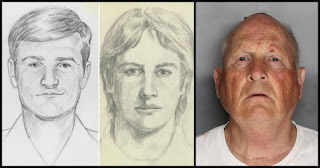 ID Golden State Killers- It's not over yet

"I'm going to kill you" from ABC To Catch a Killer

Oxygen: GSK the Main Suspect
Posted by Jill at 12:38 PM